The major theme that WCI has set itself is to fuel the discourse on how we want to see our society shaped in the new age of the Anthropocene. Seen in this light, the social sciences should actually be the ones to at least provide us with the reference models on the basis of which we want to develop our ideas about a desired, "thinkable" society. The two WCI publications published by Edward Elgar provide a wealth of material to substantially enrich this discussion on shaping the future:


At the beginning of the second decade of this century, the renowned Bertelsmann Foundation, with the support of an opinion research institute, conducted a survey among the German population on the question of the extent to which people in Germany are satisfied with the economic system in which they live. The result was that more than 80% of the population judged the prevailing, not to say all-determining economic system to be no longer adequate, even in need of replacement. What the study did not say, however, was what the people had in mind as alternatives.

From my point of view, having taken on the task of curating the section "Alternative Economies" in the WCI programme, the present discourse platform is about opening up possibilities for discussion in order to participate in the finding of a new economic model framework (or possibly several models). Thus, it is not about an apodictic propagation of a particular model, but rather about offering an open discourse which, we as representatives of the WCI hope, will help to accompany the dynamic process of adapting the concepts of economics to the equally dynamically changing social conditions.

As noted at the outset, the model of economics is always a model that reflects society and its needs, and not the other way around, as one might believe today given the predominant role of finance in particular. On this point, the WCI may be biased: We are convinced that the neo-liberal "philosophy" of a completely free market with private, untethered entrepreneurs as actors determining the economy, as once put forth by the Mont-Pelerin Society, is no longer appropriate in view of the massive problems threatening us through climate change and environmental consumption. 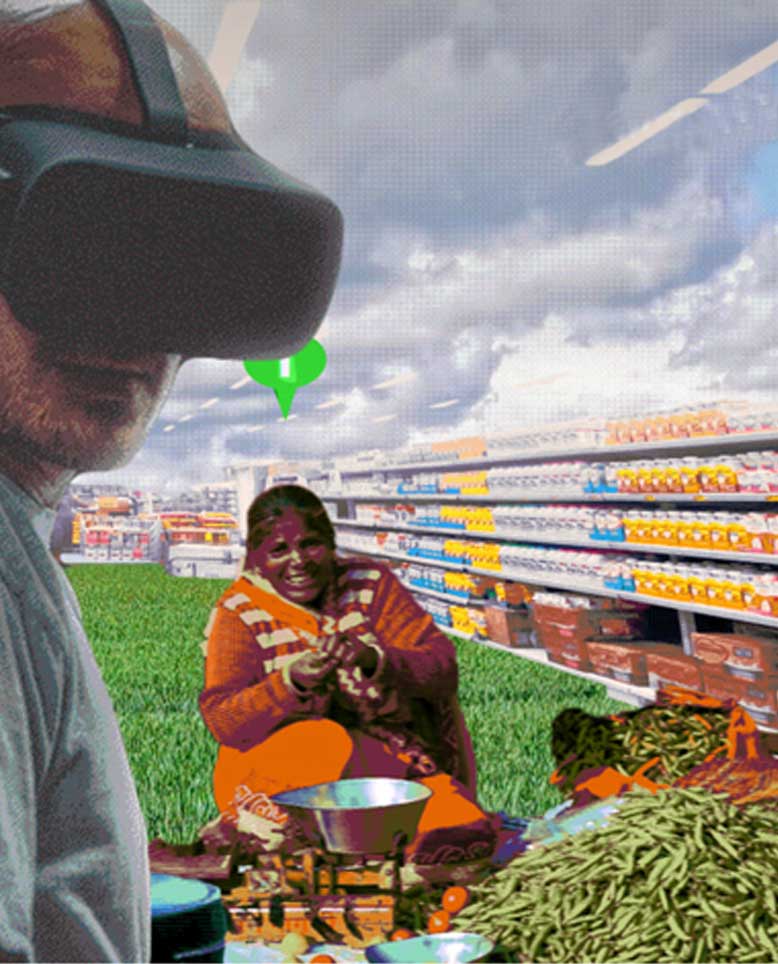 Image of The Intersection, a Superflux project 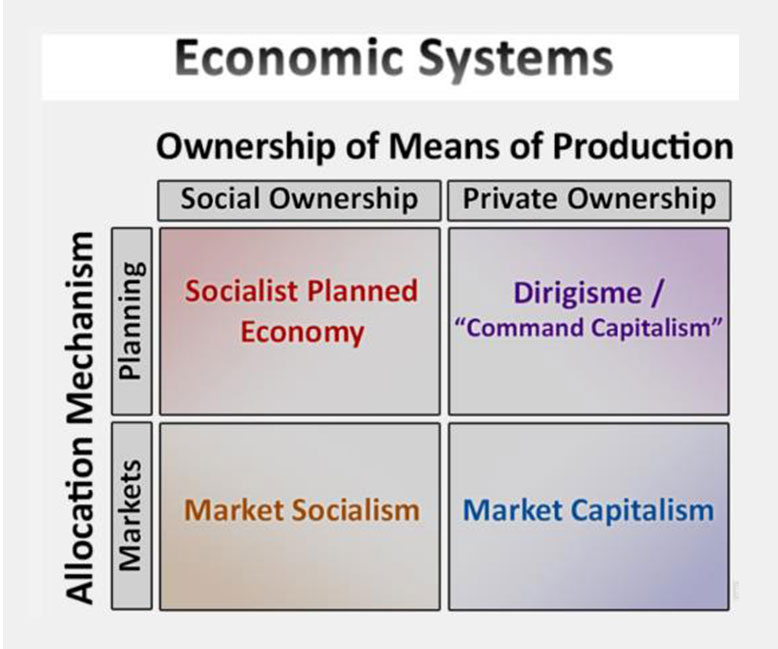 In our view, the insightfulness of such free agents is too limited to leave it to you, the private companies and entrepreneurs, alone to determine how the economy should function.
We are aware that various models of economic (and political) constitutions have been tried in history and, as was shown, for example, in 1989, failed grandly in the form of misguided socialism.

But we equally perceive that radical capitalist models have also provoked harsh reactions up to and including destructive civil wars.

The scheme of combinations of the two main basic concepts, namely the model of capitalism versus that of socialism, reproduced here, illustrates that the question of a successful model satisfying all is and remains unresolved.

What we can follow with optimism, however, is that there is a broad discussion in the academic and intellectual community on the question of what the "best" of the models might be, which is visualised by this next image: 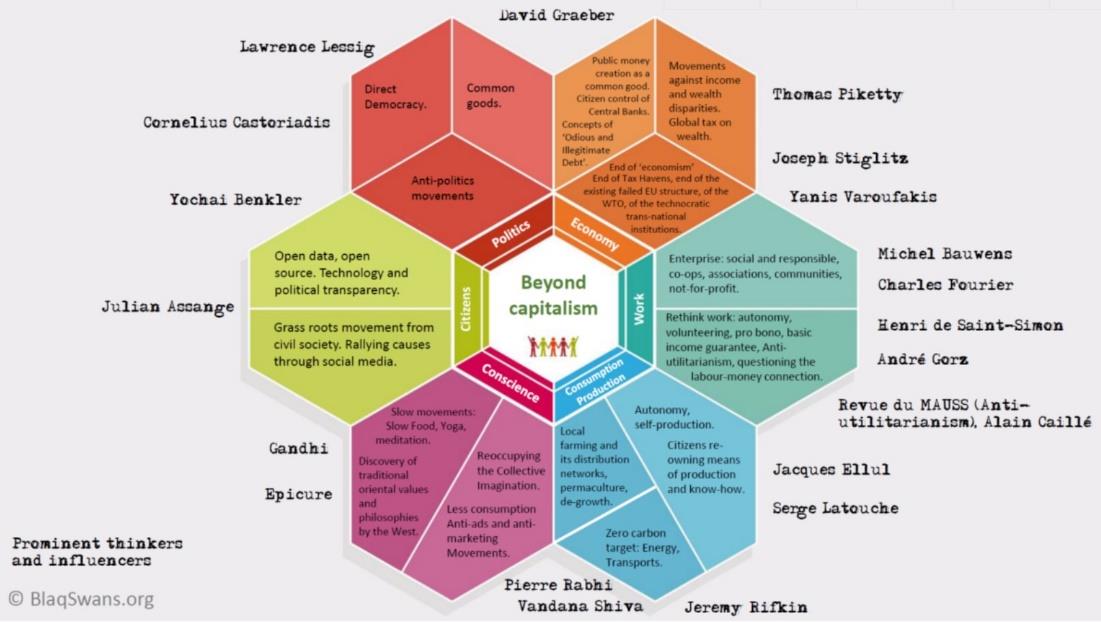 As said: WCI does not have the means nor does it strive to be the dominant determinant in favour of new economic philosophies, but rather we strive to stimulate and keep active a lively, quite and gladly also controversial discussion about the future of the economy and thus the conditions determining the economy under the framework conditions of the Anthropocene.

To this end, the platform offered herewith serves as a complement to the other subject areas whose qualified treatment the WCI has undertaken as moderator. However, the accomplishment of the task we have set ourselves will only succeed if as many bright minds as possible participate in the discussion, for which we offer an open opportunity here.

What is neoliberalism?
A political scientist explains the use and evolution of the term 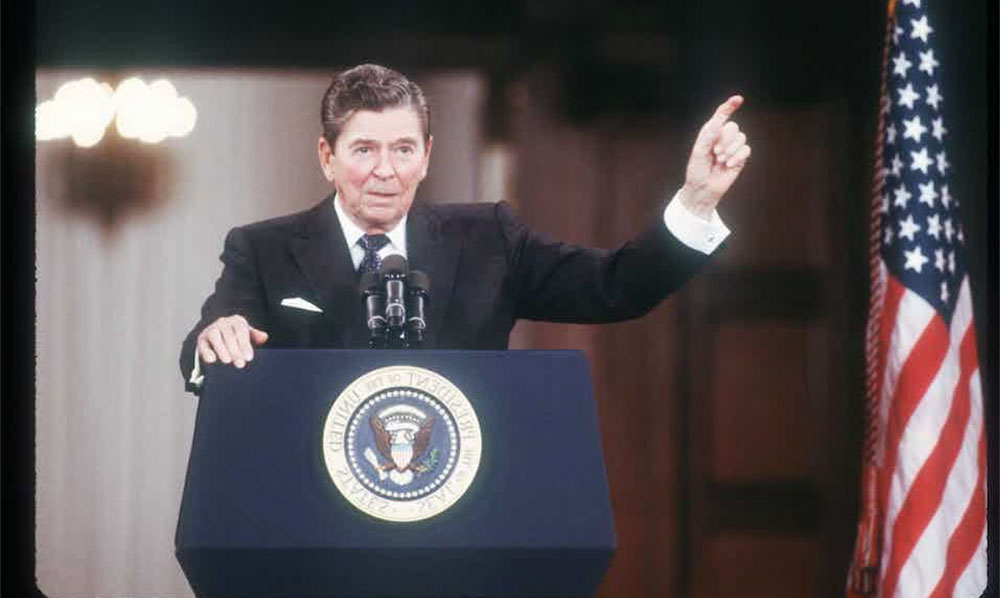 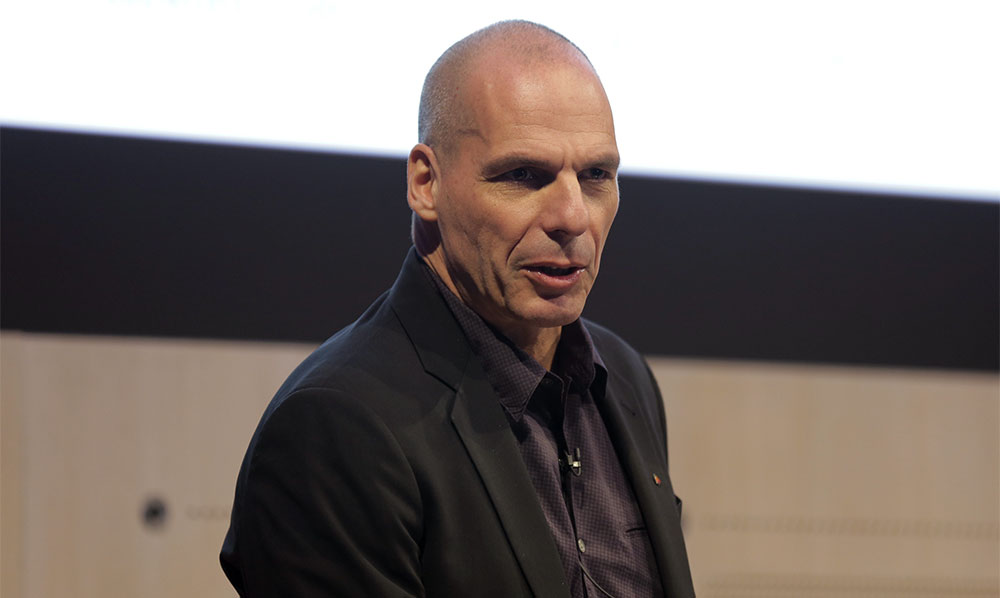 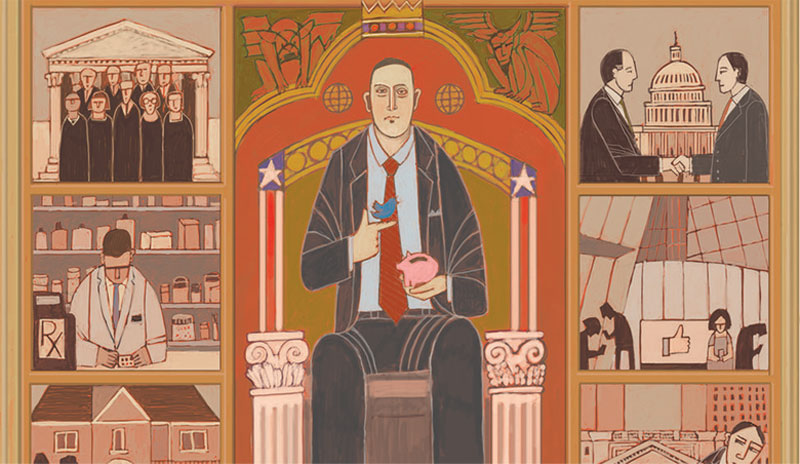 The starting point of the interview is Varoufakis' confession that economic models within a "game world" have offered him, as a scientific economist, the opportunity to "play God" by changing various parameters of an artificial economic world at will and thus trying out how economic and especially monetary policy developments can be turned around.

His position on cryptocurrencies - prominently represented by Bitcoin - and NFTs (he excludes DAOs for the time being) is that he sees nothing new in them, rather that these manifestations of value are nothing more than material exchange values whose production and possession reflect classic social power positions, if not reinforce them in the direction of a new, modern feudalism - he calls it Techno-Feudalism. For him, this is not changed by the fact that cryptocurrencies are exclusively digital and ostensibly decoupled from real values, because even today the so-called real money in the books has long been available only in digital form. The question is which role who, i.e. specifically central banks, commercial banks and money recipients, will take in the emerging new game arrangement, whereby the game played is socially and therefore almost exclusively politically determined.

After an excursus on national monetary policies with special attention to countries (usually in economic difficulties) that have already allowed cryptocurrencies, Varoufakis turns to his actual topic, the “Oligarchisation” of the economy as he sees it. He sees it as proven that in the historical development from feudalism to capitalism and its historically advanced, paradigmatic mutations,

most recently in the version of market capitalism, we have recently entered a new phase of techno-feudalism, in which the market no longer determines the rules, but a "command capitalism".

In this new, current capitalism, for which no term has yet been found, in which the use and ownership of digital platforms, their algorithms and their aggregated data that determine them - the latter provided free of charge by consumers - what was classically regarded as capital is 99% at the disposal of a few techno-oligarchs à la Musk, Bezos, Zuckerberg and others. In contrast, we, the population, with an ownership share of 1%, are the ones who provide the real economic output (and obviously the majority are not aware that we are being exploited in a new way). It may seem romantic that the 1% society believes that it too can participate in an income without its own input, as exemplified by the monopoly oligarchs.

As for more in-depth reflections on this, Varoufakis refers to his ongoing book publications.

This article, which is not easy to read, is presented here for discussion because it inevitably provokes a debate on how a future economic model that can cope with the challenges of the Anthropocene could be designed.